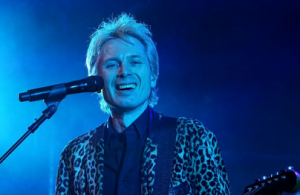 Franz Ferdinand visited Nottingham seven times in their first three years, building up to a 2005 show at the arena. Since then, two albums, but no gigs. A fine joint album with Sparks recently rejuvenated both bands. Sparks were magnificent here last summer and hopes are high for tonight’s FF return.

Fifth album Always Ascending takes the familiar template (influenced by XTC, Wire and even a little Talking Heads) with less of the pop/disco elements which left some of their audience behind. It only came out on Friday, so the busy crowd don’t know opener Paper Cages, which singer Alex Kapranos introduces with a balloon heart. In the old days, Kapranos was a cool front man and the band exuded angular, sardonic wit. These days, dyed blonde, he’s gone full festival, using vigorous arm waves and multiple call and response rather than Guardian reader pleasing banter.

Cheesy, yes, but boy, does it work. From second number, The Dark of the Matinee on, the mosh pit is reminiscent of a Libertines crowd and populated by youth who hadn’t started school when the first album came out: a sure sign that it has become a classic. The moshing only intensifies for a terrific No, You Girls.

Original guitarist Nick McCarthy has been replaced with Dino Bardot on guitar and Julian Corrie on keyboards. The new, fuller sound goes into full throttle with Do You Want To. The songs get a much bigger reaction than they did when new. Maybe that’s partly down to their being sole headliners. I seem to recall them as second on the bill with The Libertines first time I saw them, and the second time they followed the Fiery Furnaces, who had just released their best album, Blueberry Boat, and were in unfollowable form. Alex dated their Eleanor Friedburger for a while. Sadly, there’s no Eleanor, Put Your Boots On (from the second album) tonight.

New songs are mixed in throughout. Lois Lane, Huck and Jim and the title track stand out. The penultimate Take Me Out is awesome. Hard to follow that but Ulysses, Darts of Pleasure and the closing This Fire do the job nicely. Ninety minutes packed with bangers. Franz Ferdinand are back.

Support was from Albert Hammond Jr, filling time between Strokes albums. His band, weedy vocals aside, sounded rather like them, fuller than when I last saw them, at the Social, but you wish he’d go back to playing rhythm guitar and add a singer. The odd Strokes number would be nice, too.

This is a slightly extended version of my Nottingham Post review. Their Kevin Cooper took the photo above. Here’s ‘Lois Lane’.

One Reply to “Bangers on Valentine’s Day. Franz Ferdinand’s return to Rock City.”