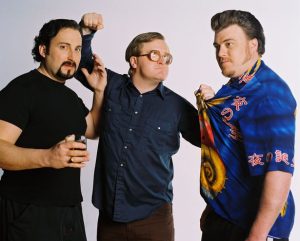 Slightly expanded version of my review in yesterday’s Post. Tomorrow, news of my next book.

This Canadian mockumentary has run to twelve seasons (the first eleven recently went up on Netflix), but has always felt like a secret. Indeed, the only person I know who watches it, and is going to this tour, is the internet buddy who introduced me to them ten years ago. Yet the Concert Hall is crowded with, thirty-somethings. How did they hear about it?

Some have taken the cast’s advice: come drunk and this docu-soap, about a pair of ne’er do well dope growers living in a Canadian Trailer Park and their neighbours, is best watched while well oiled. Julien (master mind/all day drinker) and the indefatigably dumb yet arrogant Ricky get into all sorts of scrapes, frequently assisted or hindered by their bespectacled, not-as-nerdy-as-he-looks friend, Bubbles, while wannabe cop Randy tries to frustrate them.

The TPB’s arch enemy, park boss Jim Lahey, was played by John Dunmore, who died a year ago, putting the series into hiatus. He’s featured heavily tonight, in the copious clips shown on a big screen, which is where Ricky and Julien first appear, in silhouette. They’re soon followed by Randy and his famous belly. Yes, TPB fans, Randy stays topless throughout.

The show is at its best when it’s just the four of them, affectionately riffing, talking filthy and teasing each other. Ricky, for instance, thinks that Cheerios are baby doughnuts. But there are two hours to fill, which means audience participation games and a couple of songs. Their version of Pointless (Sunnivale Feud) is endless but ‘Ball Off’ is funny and Randy’s Belly Baring competition is hilarious.

Before the interval, Randy sells playing cards in a raffle for Ricky’s bong. The winner is presented with it at the climax, then invited backstage.  The evening is anchored by Bubbles, who sings and plays surprisingly well. His band will appear on the Trailer Park Boys cruise, promoted on the stage backdrop before and after the show, where minor characters Corey and Trevor (& many more) will also be there for the faithful. Tonight was pretty good but I think that’s a step too far for me….

The biggest cheers of this good-natured evening come for the tribute to the late, not-so-great Jim Leahy at the end. The 18 year old I took with me loved it all and the TPBs say they’ll be back. The TV show may be over but this may turn out to be less of an ending, and more the beginning of a lucrative new chapter.