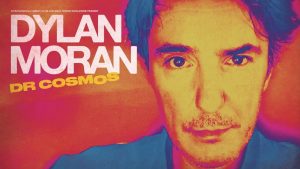 Extended, more considered (ie less tactful) take on the show at the Royal Centre last weekend, the original of which appeared in yesterday’s Post.

Dylan Moran has lost weight and gained a better haircut since he was last here, four years ago. He’s sharper in other regards, too, and starts with something he never does: audience participation. However, he warns

It’s 22 years since the Irish comic, now 47, won a Perrier award, 14 since the glorious bookshop comedy, Black Books, opened the door for more TV and film. Yet his work in neither area has fully taken off and he remains primarily a stand-up, with a new tour every three or four years. Last time round, he gave the sense that his heart wasn’t entirely in it. Maybe Nottingham got an off night. To get us in the mood for tonight’s show, we rewatched a couple of episodes of Black Books, which remains gloriously funny.

Tonight, he kicks off in fine fettle, in a long piss take of comics’ ingratiating how nice it is to be back in your wonderful city routine, describing a visit to our non-existent standing stones. Riffs about Brexit and his family are broken up by other surreal flights of fancy, along with copious swearing. Half an hour in, we’re given a reason for his new demeanour (though he never explains the show’s title). One which also explains the large red teapot on stage. He gave up drinking wine in January. For a comic whose biggest role has been that of a wine drinking dipsomaniac, this is a big deal

‘Now every day feels like three or four years.’

He doesn’t want to talk about Trump. ‘I don’t want to go round the bin saying “that’s a smelly bin”. Everybody knows it’s a smelly bin.’ Throughout, there’s rather too much my generation’s getting old and people who don’t remember before the internet don’t know they were born. The stuff about his kids also feels lazy, and I suspect that’s not just because I don’t have kids. Most of it goes down well though. The forty minute first set flies by.

The second set, half an hour, mostly on death and marriage, doesn’t really get going. The encore, too, is brief and unmemorable. One can’t help but feel you’ve seen a 55 minute festival set fleshed out to fill the 75 minute minimum required to justify the seat price and interval. Even so, Moran remains an original, with plenty of fine one-liners. Good to see him in better form, but I might sit out his next visit.

PS A big thank-you to everyone who came to my book launch the night before (see below), especially Jim Burns and Gallery 47, both of whom were brilliant. It was a lovely occasion, really special, and great to get such positive reaction to the story. Thanks again to all at Candlestick Press for publishing it and Five Leaves for hosting.