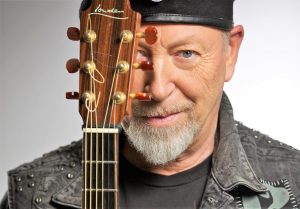 There are two kinds of Richard Thompson fan: those who prefer his electric tours and those who enjoy him most playing solo acoustic. Nottingham used to get his acoustic tours, but his visits this century have been with a band. You’ve had to travel to see him solo, though it’s always worth the journey. The last one I saw was ten months ago, in Sheffield, where he was touring Acoustic Classics.

Yet, while Thompson is one of our greatest songwriters, he’s also one of our greatest, most distinctive guitarists. Band shows allow him to solo and stretch out. He must love playing them, because the prices are the same, so he makes less money. He tends to focus on new and more recent material, too, which sells less seats. Tonight, Thompson’s touring album 13 Rivers, his strongest in some time, and kicks off with Bones of Gilead and Her Love Was Meant For Me. Taras Prodaniuk on  bass and Michael Jerome on drums, both superb are joined from time to time by Bobby Eichorn, seated, on supplemental guitar.

Fairport Convention’s signature song, Meet On The Ledge is done beautifully. Later we’re given a single that Thompson didn’t sing back then, the gorgeous Tale in Hard Time.

Other highlights include the jokey Guitar Heroes, with impressions of Marvin, Les Paul et al, and glorious solos during Can’t Win, Never Give It Up and Put it There, Pal. Wall of Death and Tearstained Letter also return to the set (I wish the latter would stay retired, but he likes it as a show closer. If he’s going to ignore the 70s and revive the 80s, could we at least have When The Spell is Broken, a stone cold classic?)

In an ideal world, Thompson might play an acoustic set followed by a longer electric one, but you should take any chance to see a legend, especially one who remains at the top of his game. There’s only one solo acoustic number in the main set, his classic Vincent Black Lightning 1952, which was debuted during his first RCH appearance, back in in 1991. But the first encore has the one song that eclipses even that, a  solo, sublime Beeswing, then King of Bohemia. Both were first performed here on his second visit, in 1994.

The best song from the new album, Trying, is also saved for the encore. Surprisingly, he only plays five songs from 13 Rivers, perhaps something to do with the songs being taken from a bleak time in his family. Even more oddly, for a man who keeps careful list, the closing encore is the same as when he was last at the RCH, three years ago, The Sorrows’ obscure, ominous 1966 single Take A Heart. No complaints though. It’s terrific. This was Thompson’s best Nottingham show since the 90s. Don’t miss him next time.