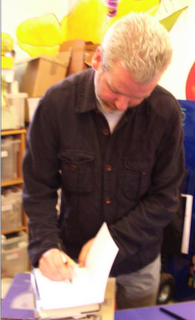 My friend and colleague Michael Murphy died yesterday after a long illness. Michael, who was only in his early forties, was a fine poet and a lovely man. I wish I’d known him better, but shortly after he started to work at Nottingham Trent he was laid low by the brain tumour that was to cause his death. I last saw Michael in August, at the National Wildflower Centre in Liverpool, where he lived. He was launching a pamphlet of poems, ‘Allotments’, written during his 2005 residency at the centre. Michael was in good form that evening but, when we talked, had no cause to be optimistic. His was a heartbreaking long goodbye. To the left is the one decent picture I snatched, of him signing our copy of his pamphlet. George Szirtes was also there that night and has written about Michael here. I’d like to send my condolences to Michael’s wife, Deryn, and to their young children, Eira and Felix. Rather than try and explain what made Michael such a good poet, I’m going to type out one of his poems so that you can see for yourself. Perhaps the most appropriate choice is the title piece from his second full collection, published by Shoestring in 2003.

Do you remember burying the thrush
we found late out on the cinder track
beside the railway; perfect as a mammoth
swaddled in a coat of soil and permafrost,
how you wrapped him in a Kleenex
among broken pots, split canes and bulbs
sprouting in the loamy darkness
under your dad’s shed?

All night,
at opposite ends of the city, we waited
to see if – if – feathers, beak and all the
intricately coiled stuff

had, with morning, ascended.