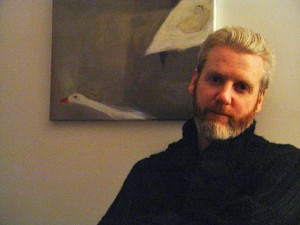 In the first of today’s two National Poetry Day posts I want to tell you about a new poetry prize, announced today. It’s for a first collection, in memory of my friend, the fine Irish poet Michael Murphy. If you’d like to read one of Michael’s poems, there’s one in the post that I wrote shortly after his death. Below is the press release about the prize, which has been set up by friends of Michael and is being run by the English Association.

To celebrate National Poetry Day, the English Association announces the inauguration of a new biennial prize of £500 for a distinctive first volume of poetry in English published in Britain or Ireland, in the first instance between January 2008 and June 2011.

The Prize has been established by some of his colleagues at Nottingham Trent University in honour of the Liverpool-born poet Michael Murphy, who died of a brain tumour, aged 43, in May 2009.

Michael Murphy’s first volume of poetry, After Attila, appeared from Shoestring Press in 1998, when he was 33. Shoestring has published two subsequent collections, Elsewhere (2003) and Allotments (2008), and will bring out a posthumous Collected Poems in 2011. In 2001 Michael was awarded the Geoffrey Dearmer Prize by Poetry Review as ‘New Poet of the Year’.  The intention of the present prize is to extend the same recognition to another new poet.

The adjudicators for the first award will be the poet and critic Deryn Rees-Jones (Michael’s widow), the poet and literary historian Gregory Woods, and the poet, translator and publisher Anthony Rudolf.

Volumes for consideration (three copies please) should be of book proportions (at least 48 pages in length, with spine and binding) and may be sent by either author or publisher to the Chief Executive of the English Association, Helen Lucas, at Leicester University, University Road, Leicester, LE1 7RH, by June 15, 2011. These should be accompanied by a Submission Form, which is downloadable from

The prize-winning collection will be advertised and reviewed in the English Association Newsletter, the journal English, and on the Association website. By agreement, a representative poem may be printed in one or more of these locations. The award of the prize and appropriate comments on the collection may be cited in any subsequent advertising.

One Reply to “The Michael Murphy Prize”