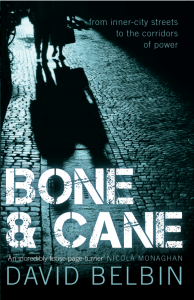 My first novel for Tindal Street Press, Bone and Cane, is published today and I hope to see loads of my Nottingham friends at the launch tonight. Those of you who own a Kindle might like to know that, for a limited time, you can get download the book at a price so ridiculously low I refuse to cite it here. Also, you can see the full size cover on the downloads page.

Bone and Cane is set in Nottingham and, to a smaller extent, London. The titular characters are Sarah Bone, a New Labour MP for a fictional Nottingham constituency, and her ex, Nick Cane, who has just served a five year prison sentence for growing industrial quantities of cannabis. They meet, and the old feelings are still there, but Nick’s recent past means that they can’t resume their relationship. Nevertheless, they are pushed back together when Ed Clark, a convicted double murderer, is released on appeal and begins to work with Nick at his brother’s cab firm. Sarah led the campaign to get Ed released, but is beginning to think he’s guilty after all. And Nick has started a relationship with the sister of one of his victims.

The story takes place with a backdrop of the 1997 General Election, where Sarah is expected to lose her seat, which she won at a by-election. The novel is about personal politics as much as party politics and it’s a mystery. Is Ed Clark guilty? How did Nick get caught in the first place? A crime novel, then, but also, I hope, a bit more besides. Unlike my long running Young Adult police procedural series The Beat, there are no police character points of view, or detectives of any kind. You could say that it’s as much a historical novel as a crime novel, trying to capture a particular era. I’ve just completed the first draft of the sequel, set mostly in 1998. If all goes according to plan, this should be published next June as the second in an open ended series.

If you’d like to read the opening chapter of the novel, it can still be found here.