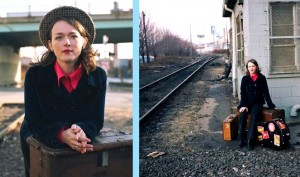 I’m delighted to discover that Laura Cantrell, who hasn’t put out a new album since 2005, is doing a short tour later this year. In Nottingham, the excellent Cosmic American Music are putting her on at Glee. I’m not sure what she’s been up to for those six years. She used to work as a Wall Street banker and do music at weekends, but I read somewhere that she’d quit that. I googled around to see if she has a new album coming out, to follow her career high Humming By The Flowered Vine and discovered that there’s a tribute album to Kitty Wells imminent. I initially wrote ‘the late, great Kitty Wells’, but turns out Kitty, born in 1919, is still alive. I also discovered that Laura put out a digital only album of cover versions, Trains And Boats And Planes in 2008, which had completely passed me by (if buying on iTunes, note it’s cheaper to buy by individual track – on Amazon you save 12p by getting the whole album at once!). I downloaded it yesterday and have already listened to it twice. Great set of songs in Laura’s pure, sweet voice. Her show at the Rescue Rooms in 2005 was one of the very best I’ve seen there and I’m really looking forward to the Glee show. For a taste of what’s to come, here’s a demo version of the one original song on the forthcoming album. There’s also a ton of great stuff to download for free at Laura’s website.