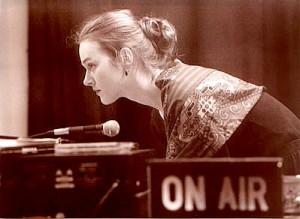 Here’s an extended version of my review from today’s Nottingham Post.

It’s been a long wait. Six years since her last album of new songs, ‘Humming By The Flowered Vine’ and a wonderful Rescue Rooms show, Laura Cantrell is back, elegantly dressed in black.  Her ‘Kitty Wells’ Dresses’ tribute album has only one new song (the title track, a demo of which can be found here) but is a welcome reminder of the 92 year old Queen of Country’s career, which stretches back more than 70 years.  Laura takes to the stage with a lovely ‘Trains and Boats and Planes’, then explains the delay. During the 2005 tour, she was, unknowingly, pregnant. Daughter Bella celebrates her fifth birthday later this month.

Tonight, the hour and three quarter set is laced with eloquent commentary, not least about Kitty Wells, whose husband wrote many of her songs to fit the feisty persona she’d created. ‘This song’s called “I don’t Claim To Be An Angel”’, Laura tells us. ‘If it’d been written today it’d be “I Used To Be A Slut”.’ Laura admits that she finds it easier to write about women in country music than to write about herself. Maybe, but she sing several new originals that sound great, not all about country icons, and has more than an album’s worth ready to record – so we could be looking at her first album of all original songs. (You can find some of Laura’s new songs, along with many from her peers, at the Radio Free Song Club, which she talked about).

Cantrell’s sweet voice is one of the best in the business and in her acoustic trio is beautifully backed by Mark Spencer and Julian Corrie.  ‘When The Roses Bloom Again’ is played early while a sublime ‘Bees’ is the highlight of the show.  A request filled encore includes ‘The Whiskey Makes You Sweeter; the great stalker song, ‘14th Street’ (my request!), John Peel favourite ‘Not The Tremblin’ Kind’ and the gorgeous ‘Two Seconds’, which is below.  She promises to come back soon, when the new album’s out, but only if childcare allows.