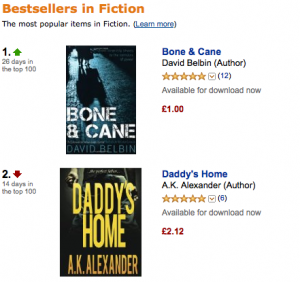 Yesterday, Amazon sent out an email to Kindle users that featured my Bone & Cane, a recent high climber on their charts, as the lead item. I’d heard that Amazon helped promote Kindle books that were doing well, but had forgotten until that email landed in my inbox. An hour later, the book had shot from number seven to number two. An hour after that, it was number one. Where it still is, with sales up 600% yesterday according to the Amazon ‘Movers and Shakers’ chart. This is my debut adult crime novel and my brilliant publishers, Tindal Street Press, are selling it at a special introductory rate in order to build an audience for the series it begins. I was very happy when it got into the top twenty, a fortnight ago. Delighted last weekend when it made the top ten. But I never thought number one was on the cards. None of us are getting rich off this (my take per book is the same as I get from a single library loan) but the exposure is priceless. And price is only a small factor in the book’s success – there are countless cheap eBooks. The main factor is word of mouth ie social networking and the reviews that people have taken the trouble to write on Amazon. So, heartfelt thanks to everyone who’s contributed in any way. And, yes, I have just delivered the sequel to the publishers. And if you don’t do eBooks, or big books (the trade paperback just shot up 100,000 places on the Amazon chart), the mass market paperback will be out in less than three months. Here are two songs of the week. The first is me beating my chest, the second an incredibly rare Aimee Mann song (a 1988 Japanese B side, would you believe) that I just got hold of. Have a great bank holiday.

The Boomtown Rats – Looking After Number One