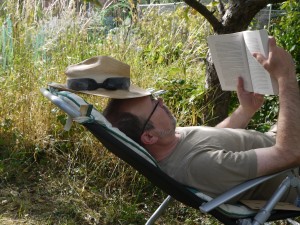 Early post this week because I’m off to Edinburgh at the weekend. Three things to say before the post proper. If you’d like to read about my perfect weekend, why not visit the Nottingham Post? This week, they also interviewed me about my new novel, Secret Gardens. More on that below. Finally, I have a surprise, very special guest blogging the Saturday after I get back (skip to the bottom to find out who).

Here’s what I’ve been reading (and listening to) over the last month. My favourite novel was undoubtedly

Pure by Andrew Miller, an engrossing account of the destruction of a graveyard by a naive engineer in eighteenth century Paris. This doesn’t sound like the subject matter of a great story, but I’ve read all of Miller’s novels and they’re never less than very good. This is one of the best. My friend James Urquhart wrote about why for The Independent.

Electric Eden by Rob Young, an epic tome about visionary folk music in Britain. The first hundred pages or so (ie the stuff I knew next to nothing about, Cecil Sharp and the rest) are a little dense, but seeing Young talk at the Lowdham Book Festival spurred me to get on with this history, which was a chrismas present. Superbly researched and very well written, it’s of interest to anyone who likes the Fairports, John Martyn, Roy Harper et al plus more arcane artists who were around in the late 60’s and early to mid 70’s. It will make you chase up all sorts of obscure stuff. Having started slowly, I’m trying to slow down as I take in the last chapter.

One Dead Hen by Charlie Williams is the fourth book in the Mangel Trilogy (sic). Any doubts about whether Charlie was right to bring back his great comic narrator Royston Blake are quickly dispelled in this pacey, raucous, brilliantly plotted book. Some people find all of the swearing and scatology hard to take. It’s their loss.

Profit and Loss by Leontia Flynn is not out until next week but I got a copy because it’s the Autumn choice of the Poetry Book Society (which recent lost its Arts Council grand, and deserves your support – it’s very good value). I’ve read the bulk of this and am saving the long poem for an appropriate half hour: economical, elegant, tightly metred verse on domestic subjects that will speak to most readers.

Unfortunately, It Was Paradise, the selected poems of Mohammed Darwish are the work of a guy who never got the chance to write domestic poetry, having been forced to flee his homeland when he was a child. This is intense, lyrical poetry, full of politics but never hitting you over the head with polemic. I’m reading from Darwish’s work at the Edinburgh Book Festival on Sunday. An Amnesty International free event.  See the entry below for details.

It’s All About The Bike by Rob Penn was a book I picked up at random to read in bed at a friend’s and ended up finishing before I left. A kind of history of and homage to the bicycle which you don’t have to be a keen cyclist (as I am) to enjoy. It’s structured around Rob’s hunt for the perfect bicycle, which kind of works. For me, the perfect bicycle is my 15 year old Dawes, which rides perfectly but looks too knackered for anyone to think about nicking it.

A Married Man by Piers Paul Read. Rereading is one of life’s great pleasures. It was thirty years since I last read this, my favourite of Read’s novels and, as I’m about to begin the third Bone & Cane, it seemed a good time to revisit this novel, set in 1973-4,  about a barrister who decides to become a Labour MP. It holds up really well on a third reading and I was surprised by how well I remembered it, except for a sudden lurch into epistolary form towards the end, where it veers perhaps too much into Graham Greene The End Of The Affair territory. An old fashioned, but very satisfying novel.

Musically, the new Fountains of Wayne album, Sky Full Of Holes arrived the morning we left for Cornwall, and got a lot of play in the car. FoW are the American Squeeze, playing catchy, timeless songs with sharp, acerbic lyrics, like the one featured below. Since getting back, I’ve enjoyed the new Kanye West/Jay Z album, and have been hooked on the other song below since hearing it on the radio the other night. Enjoy.

Oh, and, before I go: two trailers. This Sunday, I’m at the Edinburgh Book Festival, reading with Christopher Wallace (that’s me, above, starting his novel Killing The Messenger in the allotment this week). More below.

And normal scheduling will be resumed, with regular Saturday posts, from a week on Saturday, when I’ll be featuring my second guest blog of the summer. I’m honoured to have a piece from the legendary crime writer, Lawrence Block, who has two novels out in the UK in September. There’s the long awaited new Scudder novel and a novel of sex and violence by his female alter-ego, Jill Emerson. So, on September 3rd, Lawrence Block meets Jill Emerson. Don’t miss it.

One Reply to “Summer Reading (& 2 trailers)”