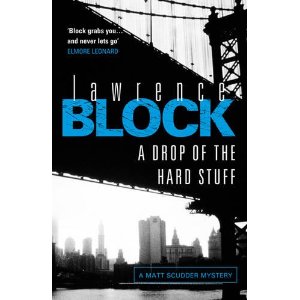 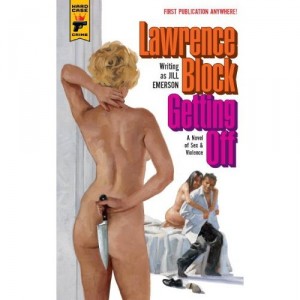 Lawrence Block: It’s so nice to be working together again.

Jill Emerson: Oh, is that how you see it?

LB: Well, don’t you?  We’ve got a book coming out together from Titan. Getting Off, by Lawrence Block writing as Jill Emerson. It’s Hard Case Crime’s first book since they hooked up with Titan, and their first hardcover book ever.

LB: You know, I don’t get your reaction at all. I thought you’d be excited.

JE: You always think women are going to be excited. And then you think its their fault when they aren’t.

JE: I’m not even going to mention the fact that your name is like huge on the cover, and you need a magnifying glass to read mine. Lawrence Block writing as Jill Emerson.

LB: I thought you weren’t going to mention that.

JE: I’m not. What I will mention is a book that’s coming out September 1. A Drop of the Hard Stuff.

LB: Oh, right.  Well, it’s nice of you to mention it, actually.  It’s the seventeenth Matthew Scudder novel, and Orion’s bringing it out in the UK.

JE: On the first of September.

LB: Right. Oh, I think I see what you’re getting at.

LB: It’s just three weeks before Getting Off comes out.

JE: When did it come out in the States?

JE: That was three and a half months ago.  Or, as you might put it, almost four. Why should it take them so long?

LB: The book got exceptionally good reviews in the U.S. I suppose Orion wanted to be able to splash them all over the cover.

JE: I saw the cover.  There’s an old generic Scudder blurb by Elmore Leonard and an even older one from Jonathan Kellerman. They haven’t used the new reviews at all.

LB: Well, they could have.

JE: Right. So there are four names on A Drop of the Hard Stuff, aren’t there? Yours, of course, Mr. Famous Writer.  And Elmore Leonard’s and Jonathan Kellerman’s.  And, of course, Matthew Scudder.

LB: I think I see where this is going.

JE: Oh, that’s a relief.  I was afraid you might insist on being called Mr. Block.

JE: Or possibly Your Worship. Or maybe Your Grace, that has a nice ring to it. But as I was saying, they didn’t put my name on the cover, not even in itsy bitsy teeny weeny letters.

JE: So?  You didn’t write Getting Off, but that hasn’t stopped you from grabbing the lion’s share of the credit. But don’t you see what’s bound to happen? UK readers have been waiting for A Drop of the Hard Stuff for months now, and the day it comes out they’re gonna pounce on it.

JE: Oh, they will. Don’t get a swelled head over this, Larry, but even I have to admit it’s a pretty good book. I won’t go all dewy-eyed over it, like the reviewers at Time Magazine and the Washington Post and the New York Times and, well, pretty much everybody—

JE: Maybe.  Or there’s always the possibility that you paid them off.

JE: Hey, I’m just sayin’.  Point is, everybody in the UK and the Commonwealth countries is going to be holed up with Matthew Scudder, and where does that leave Kit Tolliver?

LB: Kit, of course, is the protagonist of Getting Off.

JE: Duh. Kit just happens to be the star of the hottest book either of us ever wrote, and she’s going to get eclipsed by Orion’s edition of A Drop of the Hard Stuff. Why are you shaking your head?

LB: Because I don’t think that’s what’s going to happen.

LB: I think the books will sell each other.  I think you’re right, UK readers will grab Orion’s edition the day it comes out.  And I also think they’ll finish it in plenty of time to be eager for something a little different from the same author.

JE: Even if the Same Author is writing as Jill Emerson?

JE: In fact what?

LB: In fact, I wouldn’t be surprised if a lot of them pre-order both books right now, just to make sure they don’t miss out.  If they click here they can order A Drop of the Hard Stuff.

JE: Even better, they could click here and nail down a copy of Getting Off. You really think this is gonna work, Larry Boy?

Note from DB. It’s a pleasure and privilege to have a guest blog from Larry Block, one of my all time favourite crime writers. Since he wrote the above, Getting Off has been put back from September to January (update: seems the UK release date was always January, Amazon’s UK listing was misleading, but it’s already out in the US and Canada – see the comments), but you can still pre-order it and savour the thrill of anticipation for an extra 13 weeks. Meantimes, I asked Larry to choose our song of the week for this week and he suggested two by the Irish tenor, John McCormack, both of which are referenced in the new Scudder novel, which I’m looking forward to immensely. Here they are:

John McCormack – The Rose of Tralee