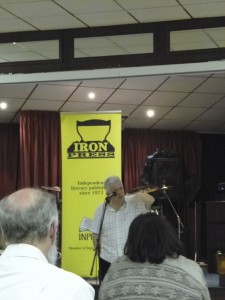 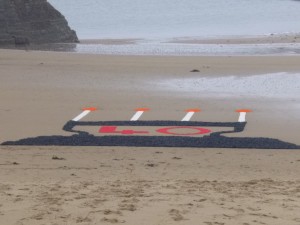 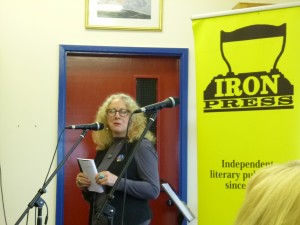 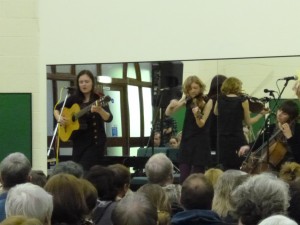 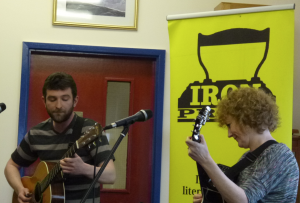 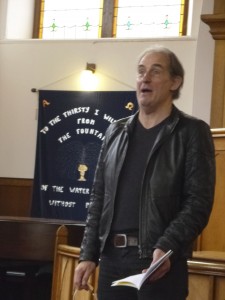 Back from the Iron Age festival in Cullercoats mentioned in my previous post. Pete Mortimer’s Iron Press was celebrating its fortieth birthday, a remarkable achievement. The redoubtable Pete (who was born up the road from me, in Sherwood, and recently wrote a memoir about coming back to Nottingham) organised and MCed a remarkable array of talent. Even more remarkably, virtually every event was sold out, with over two hundred people at the Friday and Saturday night events. These featured former Iron magazine assistant editor Ian McMillan (above), the ‘bard of Barnsley’ in the Crescent Club and Newcastle man David Almond (whose first two, pre-Skellig, books of short stories were published by Iron) in the Community Centre. Sunday saw a celebratory mural (if that’s the word) on the beach, pictured above.We met loads of old friends (for instance, Andy Croft, seen above, who I edited a short-lived literary journal with back in 1979) and made some new ones. There were several book launches, including Nesting, a ‘best of’ David Almond’s early stories and Miranda’s Shadow, short stories by the wonderful Kitty Fitzgerald (pictured above). I was only sorry that we had to leave after Andy’s Great North Run poems, which meant we missed Melvyn Bragg, Sean O’Brien and co. Congratulations to all involved, and particularly, Pete. There’s nobody like him.

Another particularly enjoyable aspect of the festival was that there was music with every event. The highlights were Me and Mr Jones (pictured), who performed with no less than nine Iron poets (including, and introduced by Valerie Laws), Gemma Gates and Freya Grace at the Salthouse (where the festival continued until late every night) and, opening for David Almond, the wonderful Bridie Jackson and The Arbour (also pictured above) who were a new name to me, but have won a place (from 10,000 entries) to perform on the main stage at this year’s Glastonbury. Their brand of folk, ethereal, absorbing, never twee, is hard to describe, but here’s a track from their Scarecrow single (which I bought, along with their album after the gig), a guitar version of the song that closes their debut CD. You can hear the whole album at their website.

Bridie Jackson & The Arbour All You Love Is All You Are

One Reply to “Iron Age”