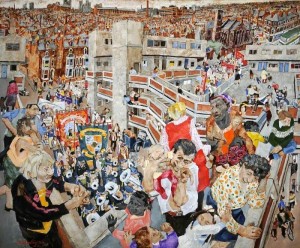 1978 was my first full year in Nottingham, where I was studying English Literature and American Studies at the old university and found myself editing the students’ union newspaper, Gongster. I often used to visit the Midland Group gallery on Carlton St in Hockley. Two exhibitions from that time stick in my mind: drawings by Kevin Coyne, who also gave a poetry reading/performance and a showcase for the Nottingham artist Paul Waplington, which I returned to more than once. Of course I couldn’t afford to buy anything at either one. A postcard of Waplongton’s Basford Hill Silver Prize Band (do have a look at the full slide show on this link) stood on my mantelpiece for years, until it became worn out, and I was delighted to see it again when we visited Manchester Art Gallery a few years ago.

Waplington’s paintings appealed to me because they were vivid, colourful, exciting depictions of the Nottingham I was getting to know. At the time, I didn’t realise how unique or original they were, nor know much about Waplington, a self-taught working class artist who made most of his living from designing lace. In ’78, I’ve since discovered, he nearly had a breakthrough to national acclaim and bigger sales. He sold quite a few paintings to galleries (one I’d love to see is a triptych that can be found in Glasgow, View Over Sneinton Dale, that can be seen in the slideshow, starting here) and was commissioned to do a few paintings of my hometown, Sheffield, in whose city gallery some of his best work can be found. But his career didn’t take off and the lace business was in decline. He moved to a smallholding in Portugal where his design skills were in demand and continued to paint, but with very different subject matter (an example here, on the website of Julian Spalding, who wrote the notes for the exhibition discussed below). For years, my only contact with his work was seeing his small portrait of a man in a flat cap on a friend’s wall.

A delight then, to find Nottingham’s Castle Art Gallery holding a big retrospective of his work. The only drag was that I only found out about it after Waplington had come over from Portugal for the opening and given an afternoon talk. Over three rooms, the exhibition brought together much of the Nottingham work I remembered with much I hadn’t seen before, like the terrific, vivacious, The Witch’s Hat, a study for a larger piece that can, I hope, still be found a college in Leicestershire. The centrepiece of the collection was May Day, Hyson Green, a portrayal of the now demolished – then new – flats a few minutes from where we bought out first house (owned by Sheffield City Gallery, the image above is a link from this BBC site, with more Waplingtons). Even scaled down it gives you some sense of his powerful composition, tremendous ability to compress and evoke city landscapes and empathy for the characters who inhabit this multi-ethnic, working class community. It’s a time capsule now but in the ’70’s it felt utterly modern.

Yesterday was my birthday and we celebrated by revisiting the exhibition on its final afternoon, glad to find that the audio on the video of a 1984 TV documentary had been fixed. It was good to talk to several people doing the same thing, all with their memories of their first encounter with Waplington’s work, whether in the hospital where one of the biggest one hangs or way back in the 70’s. A pity, all agreed, that there was no catalogue on sale, or even a postcard to be had. Maybe that will come. Afterwards we went to Wayne Burrows‘ one day Nottingham caves installation at NAE and, in conversation, Wayne – far more informed about Art than I am – reckoned that Waplington’s kind of style is coming into fashion again. I hope so, and I hope that someone will put together a book of his work.

There was a good documentary about Seamus Heaney’s radio programmes last week and in it, he spoke about being inspired by Patrick Kavanagh‘s distinction between the words ‘provincial’  and ‘parochial’. An art that is ‘provincial’ looks to the nation’s capital, but one described as ‘parochial’ is never in any doubt about the social and artistic validity of the parish it discusses. So here’s to the parochial, and next time you hear someone use the word ‘parochial’ in a demeaning way, as they tend to, tell them they’re a London-centric snob.

In conclusion, while I’m time travelling to my teens, I see that Gaffa, the Nottingham band whose lyrics most evoke the kind of world that Waplington paints, are doing another reunion gig (see a previous blog), at Contemporary on March 1st, when they’ll be selling remastered CDs of their one and only album (and if ever a record needed remastering…) plus a new EP. So here’s a live version of a song that speaks to the issues above, featuring guitar and vocals, appropriately enough, by John Maslen, whose main career has been as an art lecturer, with lead vocals & lyrics by Wayne Evans.

Gaffa – Parish (live at The Imperial)