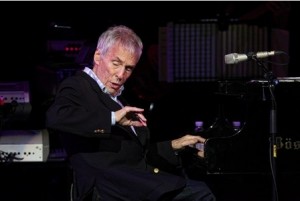 Burt Bacharach is a legend, with over fifty UK top forty hits. His ensemble’s performance on Glastonbury’s Pyramid stage last Saturday received raves. No surprise that he drew a packed house for his first visit to Nottingham. Only question is, with over 600 songs to his name, how many could he fit in? Answer: just about all the ones you’d want to hear – excluding only his 1999 collaboration with Elvis Costello, Painted From Memory.

He enters to a standing ovation, a frail figure in the trademark that seems too big for him. He plays a single note on his piano. Each of his three singers sings a line of What The World Needs Now (is Love). Bacharach plays delicate piano with jazz progressions while leading his superb, seven piece band like a general. At 87, Burt is the oldest act I’ve ever seen, but he looks younger with every song.

Those exquisite songs, mostly with lyrics by Hal David, are a real memento mori for the sixties, when our parents were young and many of us were very young. They are best when performed by Dionne Warwick, Dusty Springfield, Karen Carpenter or, recently, Rumer. Yet, as Burt pays tribute to David and begins a medley with Don’t Make Me Over, it’s clear that tonight’s singers are great and the songs are the stars. Just when I’m starting to miss middle eights, Josie James gives us a superb, full Anyone Who Has A Heart. Burt explains that he only found out about Northern Soul recently (in a Nottingham Post interview with Kevin Cooper, whose photo is above – hope you enjoyed the show, Kevin!) and how his songs were the source of several classics. The encores will include the terrific John Pagano singing the Chuck Jackson classic Any Day Now (My Beautiful Bird). Donna Taylor does a cracking version of Etta James’ Waiting For Charlie (To Come Home).

As well as telling stories, Burt quizzes us: who had the UK hit with this song?  ‘Frankie Vaughan? He always sounded like a baseball player to me.’ ‘These Magic Moments’? Yep, Perry Como. So many hits, it must be hard to keep up, but he’s particularly proud that The Beatles recorded Baby It’s You, a personal favourite. We also get a lovely Close To You and lots of songs from movies like My Little Red Book, The Look Of Love, Arthur’s theme and so many more.

I’ve seen countless shows at the Concert Hall in its 33 years, but I have never felt so much love in the room as was there tonight. Evidently lots of people were in tears throughout, but I was mostly smiling. Towards the end, Burt sings a little himself, his voice a fragile but moving thing, especially on finale A House Is Not A Home.

Another standing ovation and he concludes the 130 minute set with a four song encore, climaxing in a sing-along of Raindrops Keep Falling On My Head. A pure joy.

(Footnote: the above is a slightly extended version of my review for the Nottingham Post. I had to miss out far more songs than I mentioned: There’s Always Something There To Remind Me, Windows On The World, Trains & Boats & Planes, loads more. The one song I really missed was a favourite that Dionne Warwick only sang a snatch of when I saw her here two years ago. Here’s the full version).

You’ll Never Get To Heaven (If You Break My Heart)