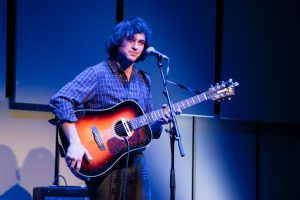 Less than a year after his Nottingham debut (which I also reviewed), Ryley Walker is back, in a larger venue, with a larger band, but a sparser audience. Whether that’s down to the heat-wave, the football final or the tragedy at Manchester Arena, I don’t know. It can’t be down to the music, for third album Golden Songs That Have Been Sung marked a big step forward for Walker, whose jazz-tinged, improvisatory gigs can be a thing of wonder.

Jam band Health and Beauty are the support and backing group. Whereas last year’s accompanying jazz duo emulated Miles Davis, tonight’s guiding spirit is The Grateful Dead. The four take a while to gel. Two of the three opening numbers are a little clunky in places. That said, drummer Frank Rosaly shines throughout, albeit his jazzy rhythms tend to be too low in the sound mix. He seems to have a dozen cowbells dangling from his lips in opener Sullen Mind. During On the Banks of the Old Kishwaukee he conjures eerie sounds from his cymbal with a violin bow. Funny Thing She Said gets a long, lovely build up. Indeed, only one, somewhat dirge-like, new song comes in at less than ten minutes.

From the fifth number, a mesmerising The Roundabout, Walker is in full swing. Writing about the Glee show, I compared Walker’s jazzy tones to 60s singer/songwriter Tim Hardin, so I was pleased to hear Walker play a drawn out version of his classic If I Were A Carpenter, a song I last heard live sung by its author (that was at, if you’ll indulge me for a moment, the first show I ever reviewed, back in 1975). It’s excellent.

Tim Hardin – If I Were a Carpenter