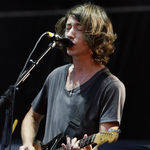 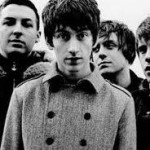 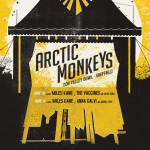 We get ourselves a good, nearly central position in the tent, not quite as good as for Anna Calvi earlier but probably at the edge of the moshing. This is where you want to be, so that you feel fully involved in the show, but don’t come out soaked in sweat and covered in random bruises. The four guys to our right get out see through plastic pac-a-macs and put them on. What?

These guys know the setlist and were here the night before. And they know that, any minute, the drinks are going to fly. The back of my head and cotton jacket get a good half pint during the first number. I wipe myself down with a hanky. Cider. And from then on, it’s a direct hit every few minutes. Doesn’t  matter where you stand either, the drink is being thrown from the front and from the back. It lets up a little in the second half of the show but starts again in the encores, as people throw whatever they have left. Resigned to a shower when we got in, I wished I’d worn a baseball cap. Then at least I wouldn’t have to keep wiping my spectacles.

Cider soaking apart, the Arctic Monkeys show last night was superb. Great sound in a tent that was last used for Lady Ga Ga at Radio One’s big weekend. I’d seen them twice before, the first time (which I wrote about at some length) four years ago, on the eve of their second album’s release, at the Leadmill. I persuaded Sue to see them on the tour for the third album at Nottingham Arena and they stank. A very badly paced show with no attempt to relate to the crowd beyond the moshpit at the front, they concentrated on indifferent new material and insulted the audience by putting their two most popular numbers (‘Mardy Bum’ and ‘Fluorescent Adolescent’) into a medley. This was a band who’d come too far too quick retreating into themselves on stage.

So when these two hometown shows in a tent were announced, I didn’t rush to buy tickets (despite it being my hometown). But then my mate Mike and I were offered VIP passes and it would have been very churlish to refuse (the VIP passes only got us into a ‘backstage’ bar nowhere near the big tent, by the way, which is probably how it should be). Read Mike’s review for the Sheffield Telegraph here. The atmosphere inside the tent was fantastic, rowdy but incredibly good natured. The band came on to Hot Chocolate’s ‘You Sexy Thing’ and, from the moment they launched into the opening track of their first album, ‘The View From The Afternoon’ you knew that this was going to be different from that pallid arena show. It was a superbly paced set, nearly ignoring their last album, with plenty of songs from the first album that they haven’t played in four years, including full sing-alongs of ‘Mardy Bum’ in the middle and ‘Fluorescent Adolescent’ as an encore.

Indeed, my only complaint about the set would be that (unlike k d lang the week before, who went to the opposite extreme) they didn’t play enough of the new album, and what they did play included a couple of less distinguished, rocky songs (‘Brick By Brick’, ‘Library Pictures’) that sound more like the first album, rather than the soulful, pop classics that fill the second side of the vinyl version. They didn’t play either of the songs I posted a week ago, but the one song they did play from side two was the superb number that closes the album. Here it is. Oh and, tickets for their next arena tour, which opens in Nottingham, go on sale next Friday. This time, I think it’ll be worth going.